One would assume that, with it being April, spring had long since arrived in New Vraja Dhama, but the capriciousness of the weather recently would bring under question such a claim. The trees may be blossoming, and spring flowers blooming, but harsh wintery days remain an intermittent feature of the New Vraja Dhama landscape.

The vagaries of the weather however have not stopped the garden team from continuing with their work. It took a little more than a year to prepare the soil in the three new greenhouses built during Autumn 2020, so now they were ready for seeding with spring and early summer vegetables. There are also hundreds of seedlings in the heated greenhouse waiting to be planted outside when the temperatures rise, hopefully in May.

In the goshala, we had five new calves born in the past month: two bulls and three cows. Govardhana Lal visited them a few days ago after the guru-puja kirtana to bless them and to participate in their name-giving ceremony.

There are various construction projects ongoing at the moment. The largest of them is the devotee kitchen, which is being completely rebuilt. Upon completion, all cooking will be on wooden stoves, just like the pujari kitchen. You will also be pleased to learn that a parikrama-marg around Govardhana Hill was recently completed, and the area of seva-kunja (the opening between the temple and Nitai Boulevard) is being beautified. We hope you can all visit soon to see all the changes for yourselves!

As we are all too well aware, the material world dealt another blow over the past month, with the Ukraine war. Among other things, it reminds us, as if COVID was not enough, that this mortal realm is dukhalayam-asasvatam, temporary and full of miseries. Ukraine being a neighbouring country, thousands of refugees arrive daily either to travel through or to seek refuge in Hungary. Our Food For Life devotees are working around the clock to distribute thousands of plates of prasadam daily for those in need.

Hungarian devotees are also helping arriving Ukrainian devotees with transportation, or if they desire, with trying to settle in the country. We have 22 devotees in Krishna Valley so far who wish to stay and 6 in our Budapest Temple. They have fled from their war-torn country, so we are doing whatever we can to help them, both practically and spiritually, and many have already enthusiastically joined the services of Radha-Syamasundara and Dayal-Nitai Vijaya-Gauranga, as well as the day-to-day lives of our communities.

We have already had two national festivals this year at the Budapest Temple: the anniversary of the installation of Dayal-Nitai Vijaya-Gauranga was celebrated at the end of January, followed by Gaura Purnima in March. With COVID restrictions withdrawn by the government, devotees were at last able to chant and dance together again in front of Gaura-Nitai and hear about Their glories in each other’s company. Both were wonderful events.

In our present issue we would like to share with you all an amazing story of a new Nitya-seva donor. About a month ago, a Hungarian gentleman named Nemeth Janos called the general number of the Budapest Temple saying he wanted to give a donation to Krishna and would like to speak to someone about Krishna consciousness. The receptionist gave Mohan Das his number, who called him. Janos told Mohan that he was homeless in Budapest for 15 years and would thus visit our Food for Life’s prasadam distribution regularly. In 2012 he got on a train to Paris as a stowaway and began living there. After some time, he got a job at a theatre as a cleaner and later even got a part in a play where he was acting as a homeless person. Nowadays he lives in a nice flat and earns good money.

After some time, he started to search after Krishna on the internet and found some videos of Srila Prabhupada, and then some Hungarian videos about Krishna Valley. Later he started to follow Sivarama Swami’s vlogs and online classes by Bhaktipada Goswami and Lilasuka Prabhu, two of our preachers here in Hungary. He expressed that he considers himself a devotee of Krishna and is very grateful for the care he received in tough times, so he wants to send a donation. Therefore, he was registered as a Nitya-seva donor and he started his contribution with a generous instalment. We keep in touch with him regularly and he plans to visit Krishna Valley for Janmastami this year.

But we hope you, dear readers, don’t want to wait until Janmastami to come for a visit! Radha-Syama are looking forward to seeing you every day of the year, but if you are looking for a special occasion, I am sure you have heard that we will be celebrating Sivarama Maharaja’s Vyasa-puja and Nrisimha Caturdasi on 14th and 15th May. We would like to offer a wonderful, grand festival for the pleasure of the Divine Couple, just as we used to do before COVID struck. We do hope many of you will be in attendance.

Finally, we would like to answer a question many of you have asked in the past few months: how is it that there is another donor(s) on my dedicated Nitya-seva day? To explain, we have to go back to 2002, when the original Nitya-seva program began. Then, devotees were choosing days according to the Vaisnava calendar, so each year their Nitya-seva day fell on a different date on the solar calendar. When the Nitya-seva project was renewed at the end of 2015 however, we started to use the Gregorian calendar, making it easier for both the donors and the office devotees to keep a track of the days. Most of the old donors changed their moving days to a fixed date, but not all of them wished to do so. Therefore, we have about 30 days in the calendar from the previous system which fall on a different date every year, and thus overlap with other devotees’ Nitya-seva days. But please do not worry, for the mercy of Radha-Syama and Gaura-Nitai is unlimited, so even if you are sharing with others, you receive the same mercy. Moreover, it remains your day to serve Them, for perpetuity!

Finally, thank you so much for all of your continued support towards Their Lordships’ daily maintenance. And whilst we are talking about calendars: we still have 96 free days, so we are eagerly awaiting new sponsors! 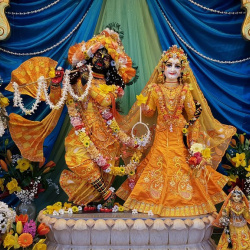 On behalf of the Nitya-seva team your servant,
Syamajiu Dasi